In 2021, ASF remains the single most significant factor affecting the meat sector in China across production, imports and consumption, two and a half years after it first entered China in mid-2018.

Emergence of mutation of the ASF virus in Asia also complicates the scenario. Detection of the ASF variant has been reported in several provinces in China and in Hong Kong, and is estimated to have killed as many as eight million pigs since the start of the year. There have been several ASF outbreaks in March, with the most recently reported case on 5 April.

A recent report from Reuters indicated that northern China has lost about 20% of its breeding herd so far in 2021 due to ASF, implying a 7–8% decline in China’s total breeding herd for Q1 2021. While the Ministry of Agriculture and Rural Affairs (MARA) has made announcements around a production recovery to boost industry and consumer confidence, indications suggest there may be some under-reporting of ASF.

On a global scale, overall swine stocks were estimated at 753 million head at the start of 2021, a 15% lift relative to 2020 levels, but still a long way short of the 781 million head reported in 2018, just prior to the outbreak of ASF in China.

Since breaking out across China, ASF has continued to spread and challenge communities in South-East Asia, including Indonesia and the Philippines. Given the busy trade relationships Australia maintains with many of these countries, the threat of ASF to the Australian pork industry remains. 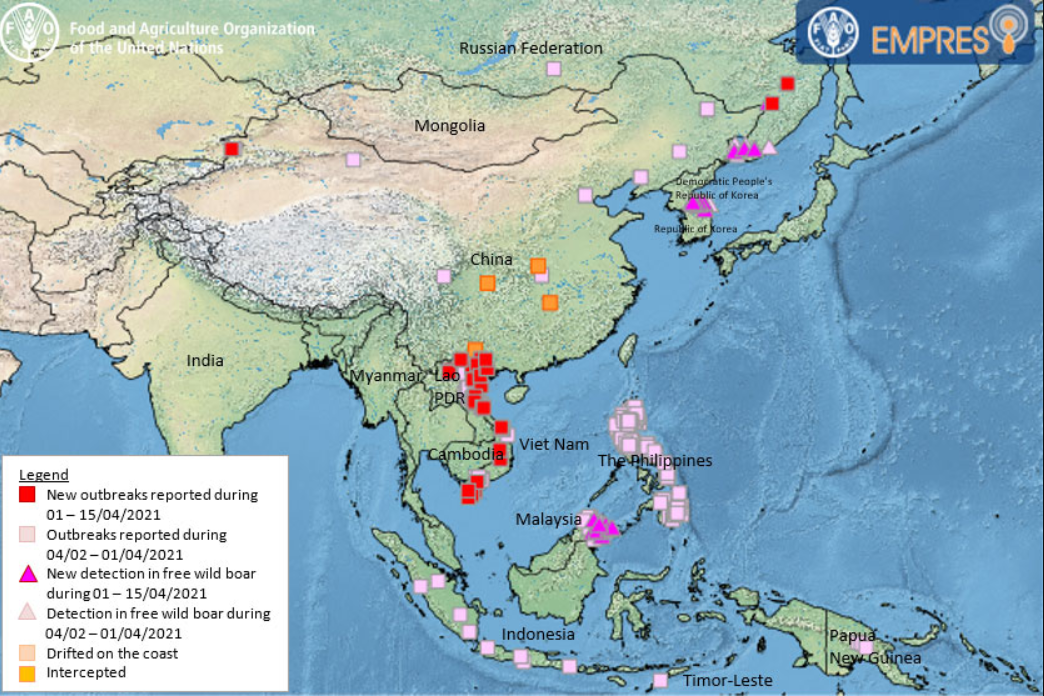 Since the first outbreak of ASF was confirmed in Vietnam in February 2019, it is estimated that 6 million pigs have been lost as a result of the virus, with pork imports increasing strongly in response. High hog prices have incentivised investment and have contributed to a recovery in the breeding herd, with total pig numbers at the end of 2020 estimated to be 85% of the pre-ASF herd (FAO) and pork production forecast to increase 5% in 2021.

However, Vietnam has also experienced numerous new cases in April 2021, which could act as a handbrake to the recovery process if outbreaks continue.

China live hog and piglet prices have been trending down since February 2021, which is typical seasonal behaviour post the Chinese New Year. This drop is often sustained until early-to-mid April. That said, live hog prices remain well above (around double) mid-2019 levels when the impact of ASF really began to flow through to prices.

Some analysts suggest the recently softening hog and pork prices could be an indication that producers have been selling off pigs to reduce their ASF exposure. Piglet prices, however, remain firm despite high feed costs, suggesting that piglet supplies remain limited and pointing to the potential for higher hog and pork prices in the second half of 2021. It is expected that the cycle of panic selling in response to outbreaks will continue to be reflected in price volatility during 2021.

Another challenge for industry recovery is the current high feed prices, driven by a combination of factors including a fall armyworm outbreak impacting domestic corn production, floods, typhoons and competition for grains from industrial use in COVID-19 sanitiser products and soybeans in bean-curd production.

China retail pork prices have followed the same trajectory as hog prices so far in 2021, though may trend up again in the coming weeks, depending on import volumes. Overall, pork prices are forecast to remain elevated relative to historical levels.

China pork imports are forecast to be 8% lower year-over-year, largely due to recovering production, but are still expected to be elevated by historical standards. Import demand for a range of meat categories (including beef and sheepmeat) is likely to remain upbeat, further supported by economic and foodservice recovery as the impact of COVID-19 continues to ease.

For the year-to-February, pork imports are up 24% year-on-year, poultry is up 45% and beef imports have risen 30%. Beef and sheepmeat retail prices reached all-time highs in February 2021 during the peak consumption period around Chinese New Year but have eased somewhat since then.

Chinese pork production to lift in 2021

Global pork production is forecast to rise by 5% in 2021 to reach 101.5 million tonnes carcase weight (USDA), as some of the major Asian pork producers are expected to continue to rebuild and recover from the impacts of ASF.

While China production in 2021 is expected to still sit 25% below pre-ASF levels, it is nevertheless expected to lift 11% on last year’s production volumes. Hog inventories grew rapidly in 2020, however, ongoing ASF challenges related to the new strain of the virus will continue to constrain production. The EU, the US, Canada and Brazil are likely to remain key pork suppliers to China throughout 2021. 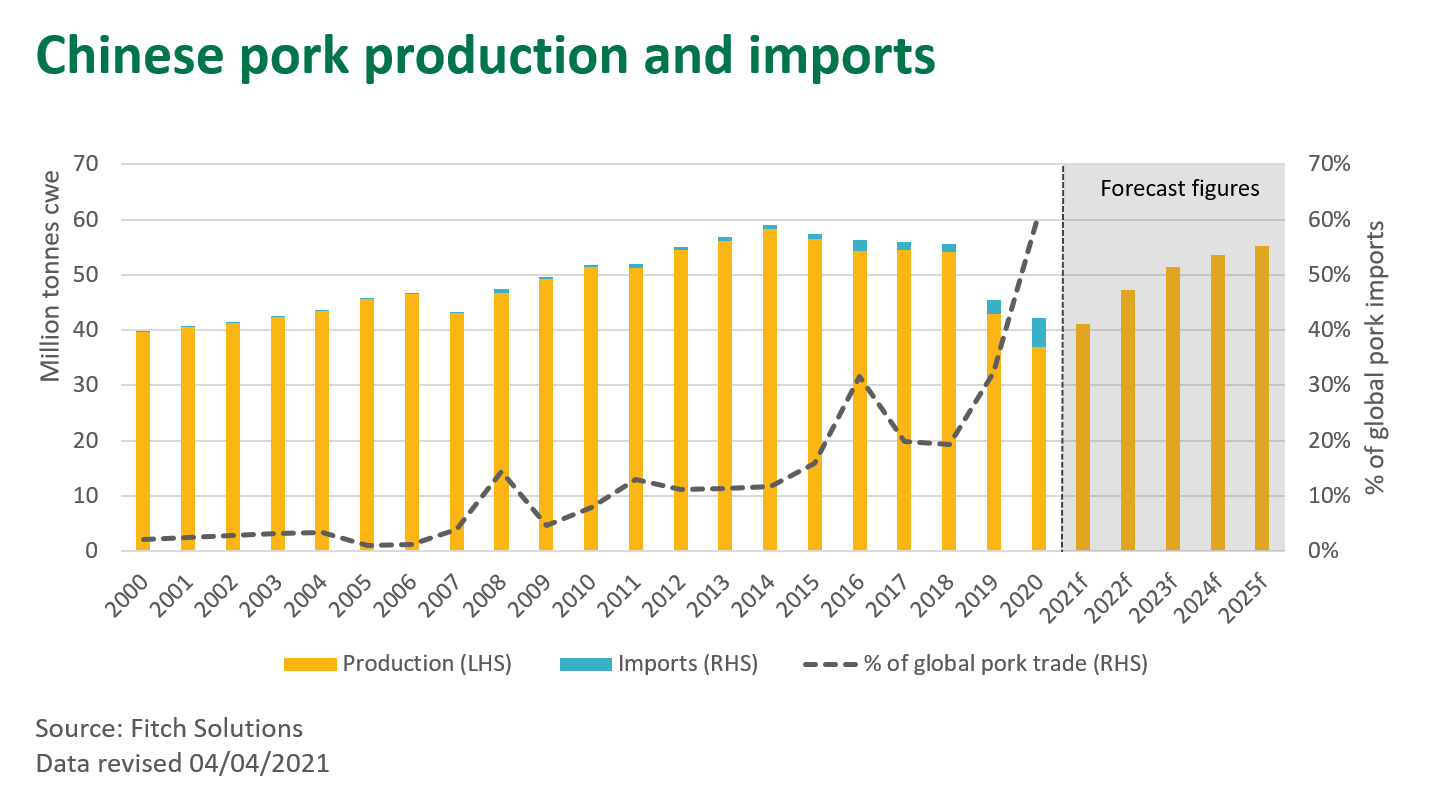 Industry analysts GIRA have confirmed China has made significant efforts toward building some 40 new, large-scale, multi-story hog production facilities in southern and south-western China, which aim to ramp up production and improve disease control. If these new facilities remain free of significant diseases, they are anticipated to result in increased production flowing into the market from Q4 2021.

The impact of ASF on Chinese consumer diets has varied depending on their socio-economic status. Anecdotal evidence suggests that lower income consumers substituted pork with fish, eggs, poultry and soya-based products such as bean curd, while higher income consumers have increased consumption of a variety of proteins such as red meat, seafood and other premium products.

GIRA have postulated that even after China’s pork industry fully recovers, Chinese consumers will continue to eat less pork in favour of other proteins, with annual per capita consumption unlikely to revert to the pre-ASF peak in 2014 of 41.7kg per person. 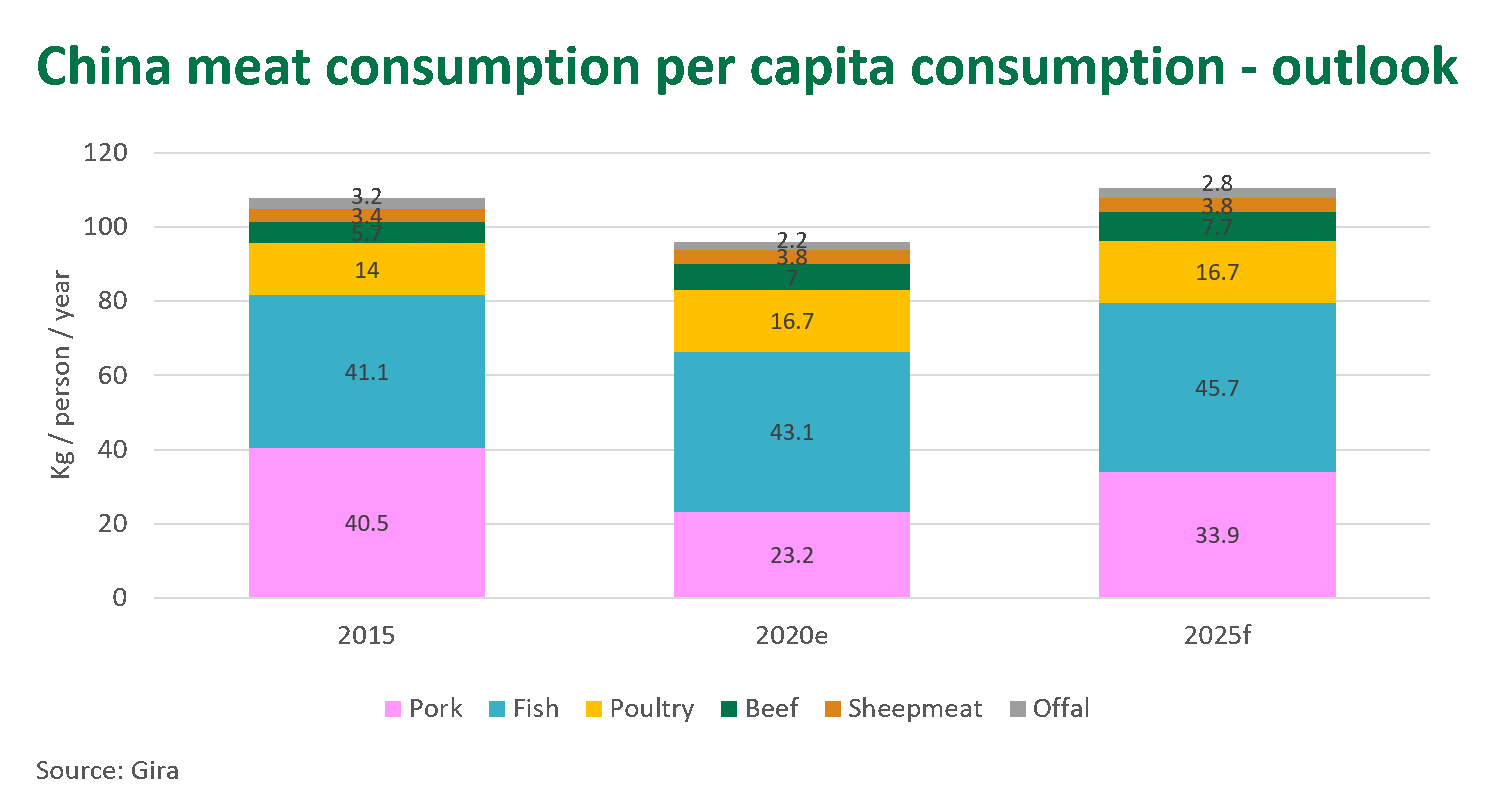