Nationally, 2.6 million head of cattle were processed from January to April, up 10% year-on-year. Add on the 350,000 head of cattle that shipped live over the same period, and the number of cattle that have exited the production system during the first four months of 2019 is only surpassed by the records set in 2014 and 2015, at a time when the national herd was inflated from current levels.

The drought-enforced high turnoff so far this year was largely facilitated by a sustained surge in female slaughter, which in April totalled 58% of total adult cattle slaughter, matching the levels recorded in March. Consecutive months of record elevated female slaughter signal an additional wave of destocking, eroding the breeding herd and significantly hampering the ability of the herd to rebuild in the short term, once conditions improve.

The impact of the increased proportion of female cattle slaughter is evidenced in an easing trend for adult carcase weights during the first four months of the year, averaging 285kg/head and back 5% compared to the same period in 2018. In both March and April, under the weight of higher female slaughter, average monthly carcase weights eased to 280kg/head. Record numbers of cattle on feed during the first quarter were not able to offset a decline in average carcase weights, due to the sheer volume of destocking witnessed in the breeding herd. 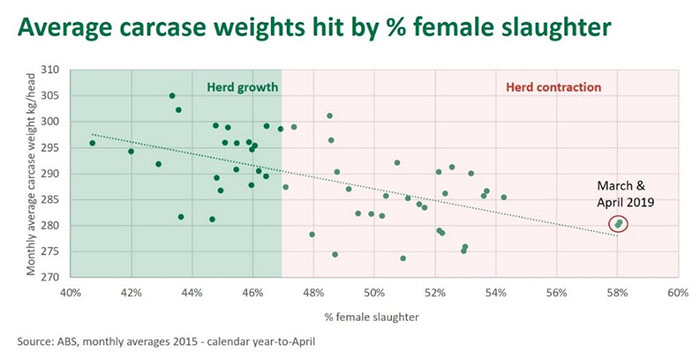 At a state level, the impact of widespread drought is clear. All states are running depleted herds, as a lack of pasture, high feed costs and severe stock water shortages have accelerated the rate of turnoff. NSW adult cattle slaughter ran 11% above year-ago levels for the calendar year-to-April, while Queensland rose 8%. Year-to-April slaughter rose 18% year-on-year in Victoria, as the state continues to support cross-border kills due to reduced slaughter capacity in SA. Through the first four months of the year, all states have reported the percentage of females in adult slaughter at or above the 47% mark, which typically indicates a herd in contraction. It must be noted that, due to the prevalence of the dairy industry in Victoria, the percent of female slaughter is historically greater than all other states.

According MLA’s latest beef industry projections, total beef production in 2019 is expected to post a 3% year-on-year decline, to 2.2 million tonnes cwt, given the expectation of an easing trend in cattle slaughter during winter and spring. Longer-term, the high destocking rates which have occurred over the past year will hamper Australia’s beef production and export volumes in the years to come.

Store condition cattle eased during the past week, with recent rain forecasts proving unfruitful in most regions. Heavy steers and medium cows remain elevated when compared to year-ago levels, as limited pasture continues to drive premiums for finished cattle.