When it comes to the protein that best suits Beijing’s harsh winter, mutton tends to be the first choice. Yet, in the vast lands of northern China, there are plenty of other options, one of which is widely praised among common folks for its affordable price and superb taste and nutrition. That is, donkey meat! In fact, there’s even a proverb that goes, “The dragon meat for the gods, the donkey meat for humankind.” Even if you don’t subscribe to the belief of ancient foodies, there’s plenty of modern-day scientific data that attests to the premium quality of consuming donkey since it has higher protein content and more natural glutamic acid, unsaturated fat, and linoleic acid than most other meat on the market. 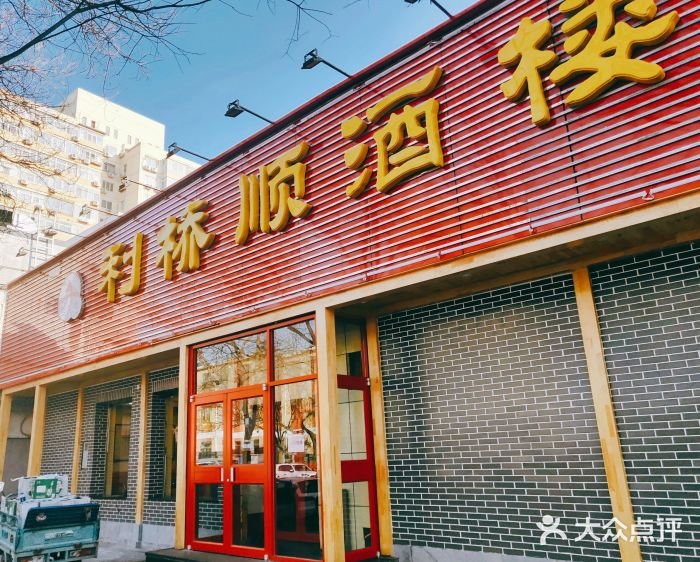 The facade looks like just about any other neighborhood eatery

To be honest, we’re not entirely sure who was the first to dig their chopsticks into the poor donkey, but throughout history, people have developed various recipes based on this slightly unconventional protein. The residents of Hebei, Henan, Shandong, and Shanxi Provinces seem to have a particular affection for it. And immigrants have long brought this tradition with them to the capital, which is why you will find donkey meat sandwiches – a signature dish – at eateries around town. However, it is still a rare case to find a restaurant that offers an entire menu dedicated to the oft-overlooked delicacy. Luckily 利桥顺 lì qiáo shùn LiQiaoShun is one such spot, and they’ve nailed the preparation of this special protein. 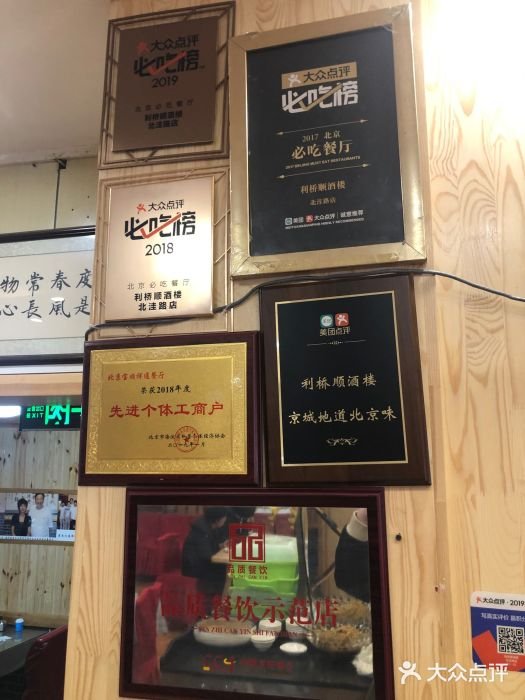 It’s got the Dianping foodie seal of approval

From the outside, LiQiaoShun is your typical neighborhood restaurant, featuring a big logo on the storefront that looks a bit tacky but is admittedly hard to miss and memorable. On the inside, however, the place is clean, warm, and comfortable. As opposed to pouring time, money, and energy into their interior design, the owner has instead chosen to show off photos of local celebrities – usually not movie stars but Peking Opera artists or crosstalk performers – who dined there.

Whereas the menu includes most of the Beijing home-style dishes you’d expect, that’s not why you come to LiQiaoShun. From the donkey sandwich and spicy donkey liver to braised donkey tongue and donkey offal stew, the chefs take care to use every part of the animal such that nothing goes to waste, all while feeding as many hungry customers as possible. 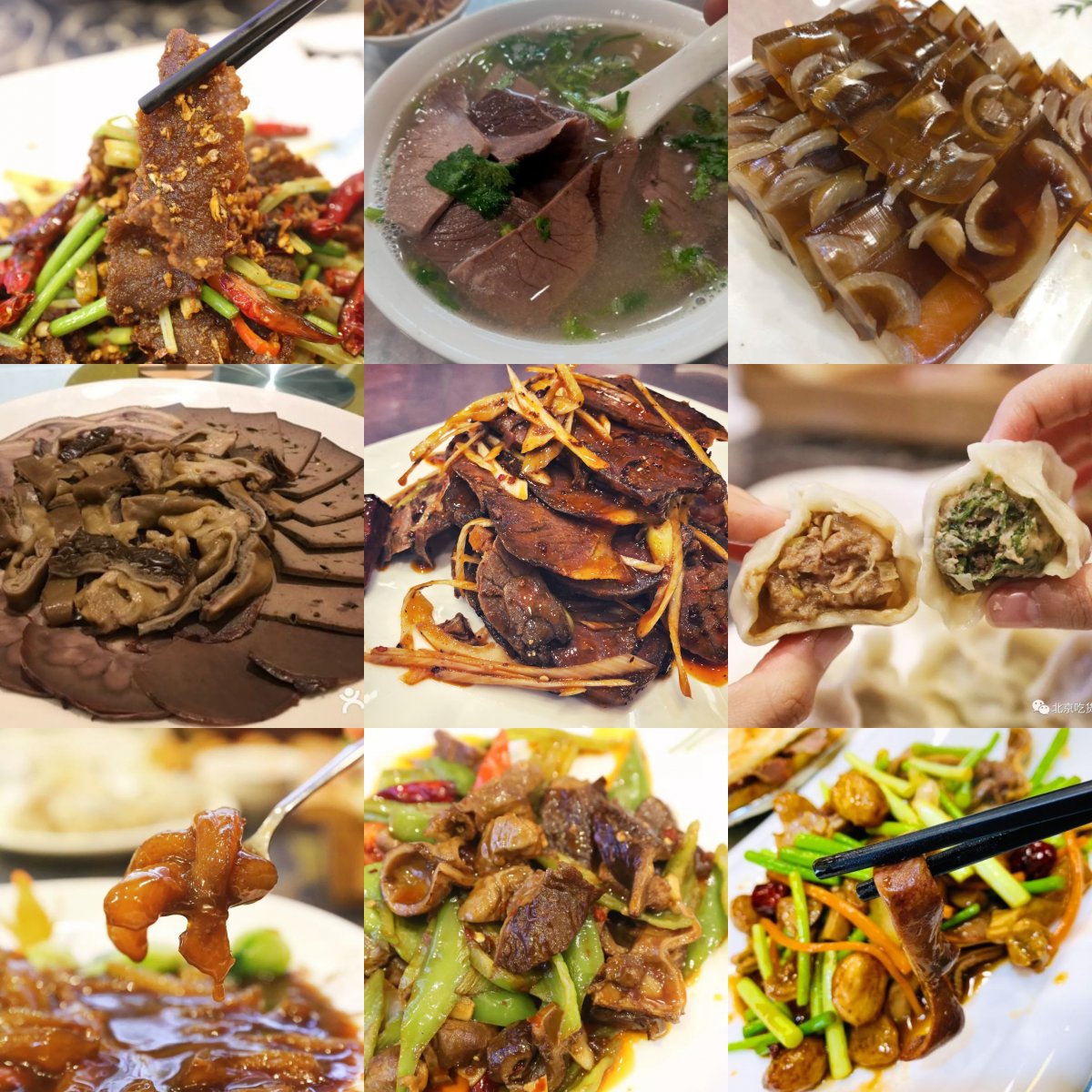 Shank, liver, tendon, tripe, every part of the donkey is treated equally and properly

The donkey sandwich comes in two variations, 保定派 bǎodìng pài which features a round sesame pancake, and 河间派 hé jiān pài, which uses a long rectangle pancake to wrap the filling. LiQiaoShun adopted the latter style which happens to be my favorite since you can stuff more meat in it. Despite the donkey being the obvious star of this dish, a restaurant’s donkey sandwich reputation will only be as strong as the quality of its pancake. A good pancake for a donkey sandwich needs to have enough layers, and be flaky but not too crunchy since it needs to be strong enough to hold the fillings. 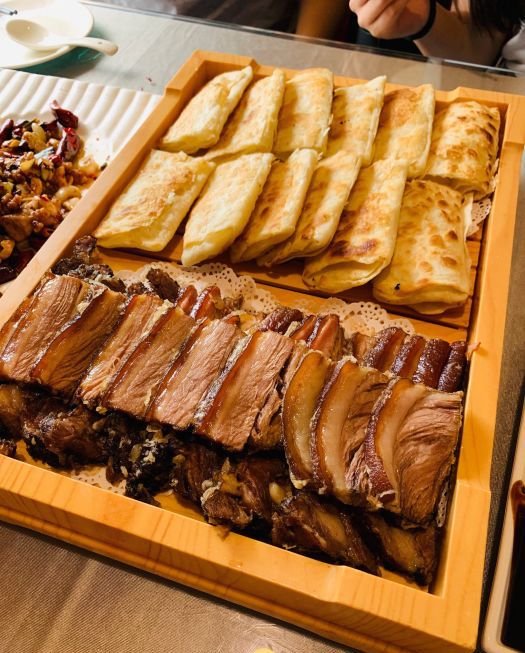 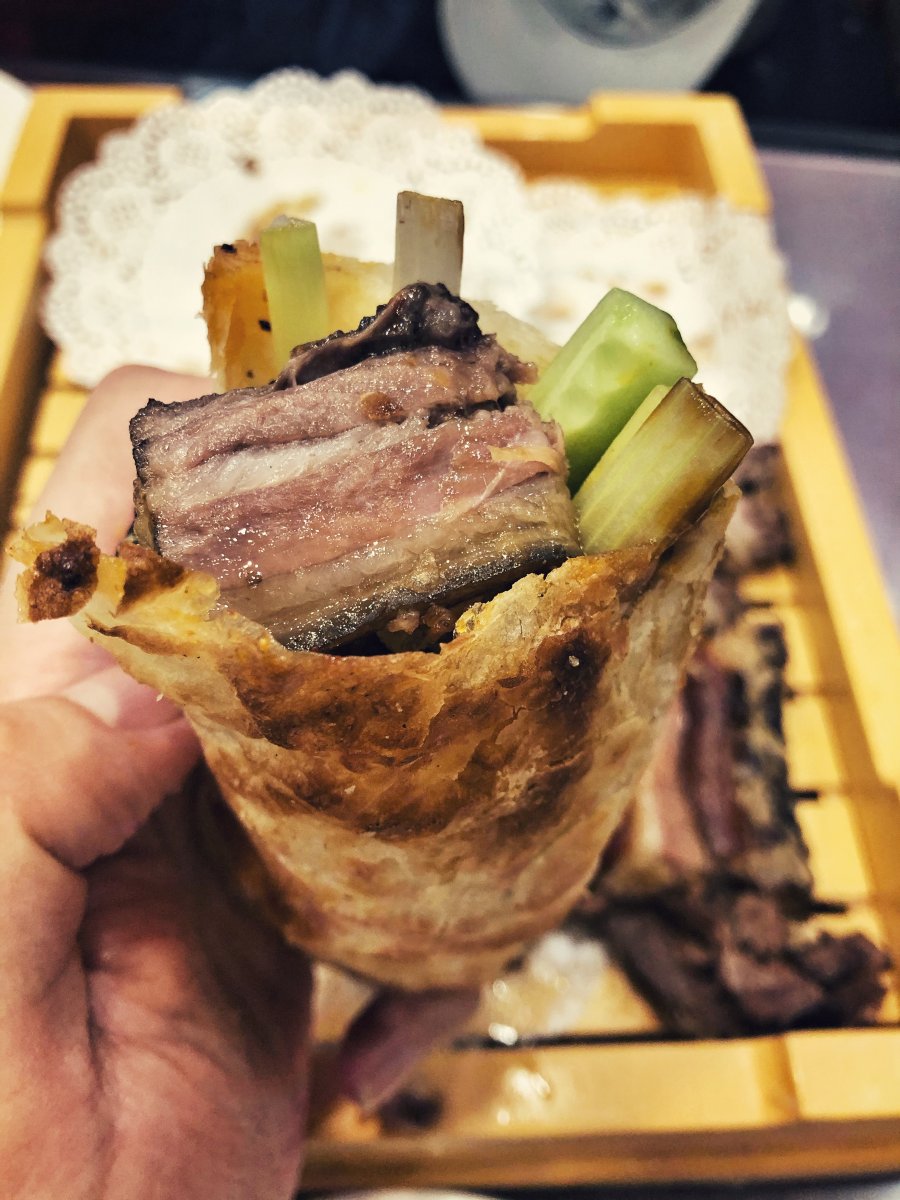 I may look a bit greedy, but you won’t blame me after trying it yourself

Besides the meat, you can also add green onion and green peppers to enrich the color and texture. Sometimes, the sandwich may contain 驴焖子 lǘ mèn zi a brown colloid, which I initially thought was donkey tendon, but turned out to be a jelly made from donkey broth and sweet potato starch. In fact, LiQiaoShun serves the savory delicacy separately. If you’re looking for something a bit more, they also have a deluxe version, 驴紫盖 lǘ zǐ gài, which uses a particularly precious part between the donkey’s ribs and is served Peking Duck style. Usually, you can only get one or two kilograms of this special treat from the donkey, and even less after cooking. But the perfect ratio of fat elevates the dish and does away with any dryness. 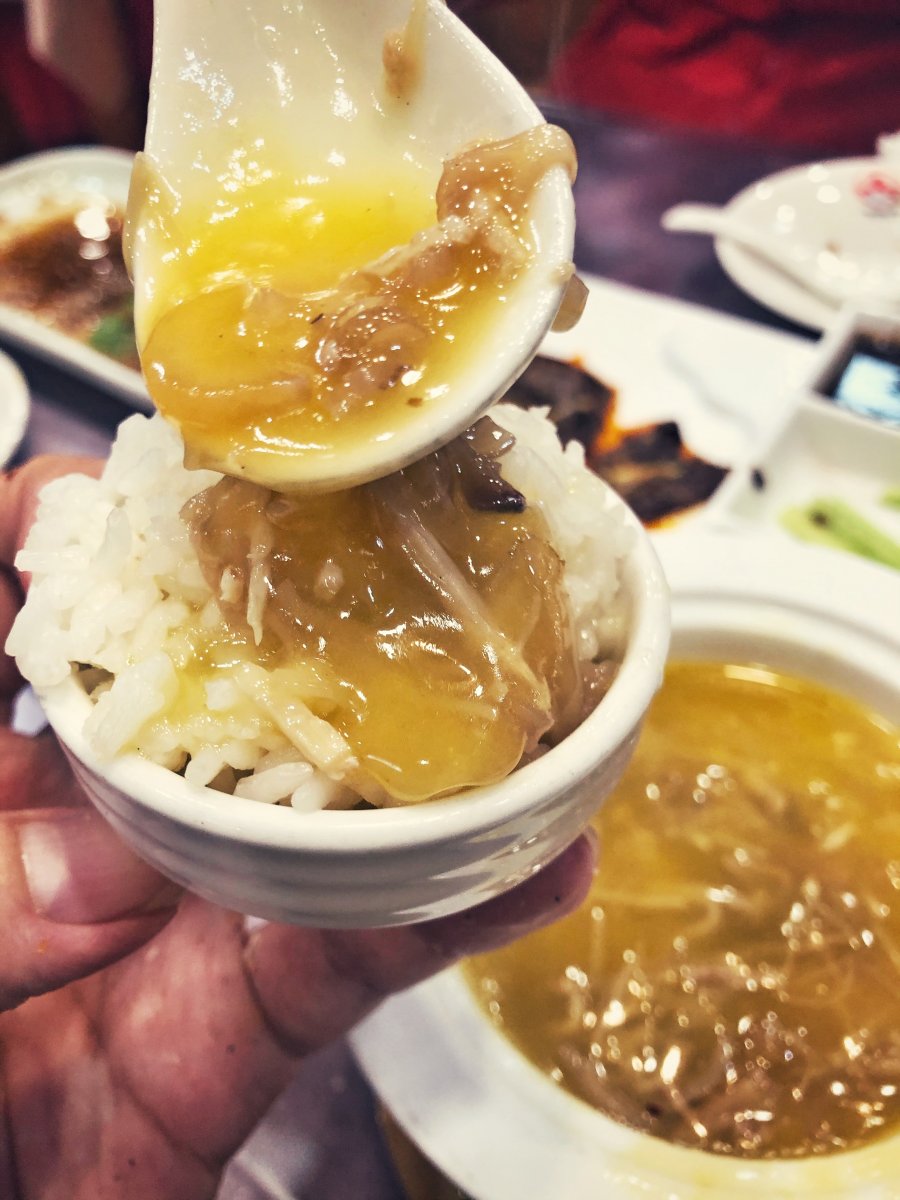 If devouring a plate of meat or digging into a panoply of donkey organs is daunting, LiQiaoShun has something that’s a bit easier on the eyes – and psyche, for the more conservative diner – a donkey-hide gelatin stew. It’s a rich, golden broth perfect for pouring over rice to enhance its flavor. And 阿胶 ējiāo donkey-hide gelatin is a renowned traditional Chinese medicine, believed to ease Metrorrhagia and symptoms of menopause, as well as restoring the elasticity of your skin, making it a historical favorite amongst the ladies. 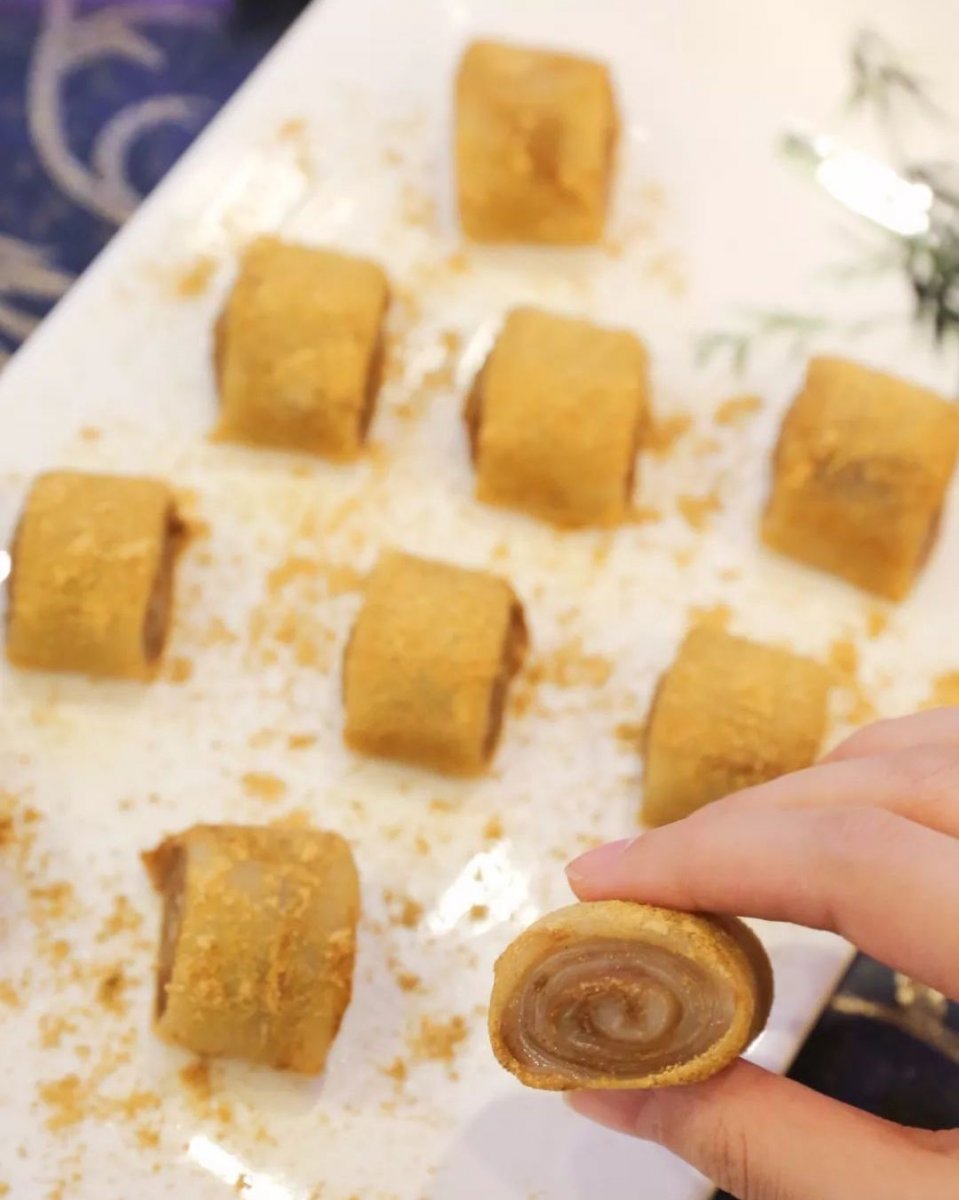 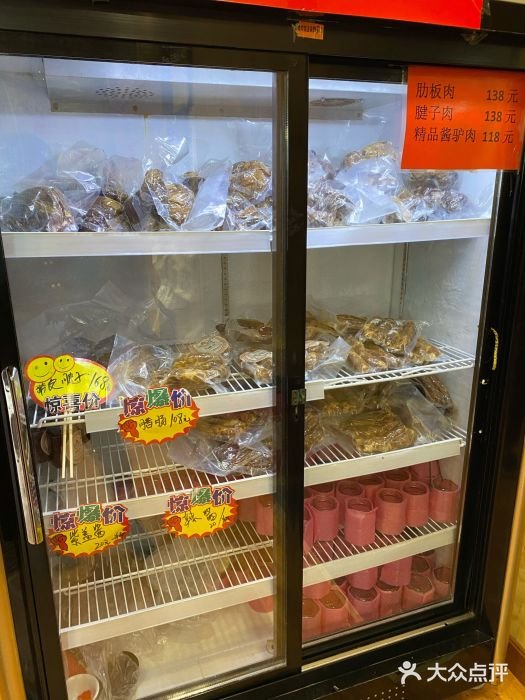 The popular options sell out quickly, so get here early

If you happen to develop a taste for this “dragon meat on the ground,” or simply want to share your experience with your friends, LiQiaoShun sells cooked and cured donkey meat for takeaway. You can pick either the shank or the ribs and let them cut the size down to your liking. Like a sort of donkey jerky, the meat is ready to eat and can be stored in the fridge for more than ten days.