EIGHT months into his new job as Meat & Livestock Australia managing director and CEO, Jason Strong gave a frank and forthright account of his views on anti-meat activism and the perceived threat to red meat from plant based proteins during last week’s annual general meeting in Tamworth.

The Lemontree feedlot invasion took place the week before he started in his new role, followed by a series of well-publicised animal activist protests across Australia, focused on abattoirs, retail outlets and Melbourne’s busiest intersection outside Flinders Street Railway Station. 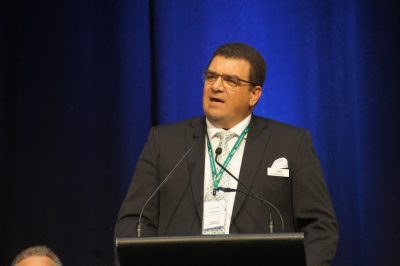 “With such public displays of activism against our industry, it’s easy to think that our industry is ‘under attack’ this year, more than ever before,” Mr Strong told stakeholders attending last week’s AGM.

“So naturally, the question I’ve been asked countless times is, What’s MLA doing about it?”

Before offering an answer, Mr Strong offered a few facts, to add context.

While anti-meat extremism had recently spiked in news headlines, 80pc of that coverage had been favourable towards red meat producers, he said.

“We’re seeing the general public, also fed up with extreme animal activists. The public has joined the call for jail sentences and fines for farm invaders. The public stood shoulder-to-shoulder with our industry – applauding when the trespass laws were passed – to punish such outrageous actions.”

The fact was, red meat producers were trusted by consumers, he said.

“The bottom line is that there’s no evidence of any tidal wave of consumers turning to veganism,” Mr Strong said.

For the last three years, the number of urban Australian’s who identified as vegan or vegetarian had remained stable at 7pc. And more than three-quarters of that group regarded themselves as ‘flexitarian’ – someone who occasionally eats meat.

For consumers, the main barriers to getting more beef on the table were price, and health.

“It’s true that red meat prices at the checkout are rising -but this is something to be celebrated,” he said. “After all, we’re producing a high-quality, consistent product. Increasing the value of our product is what it’s all about, especially when those returns filter all the way back along the supply chain.”

Even though prices are rising, consumers were seeing value in the beef they buy, with results from MLA’s recent ‘Australian Beef the Greatest’ campaign showing that a growing number of consumers are willing to pay more for beef.

So what’s MLA doing about the anti-meat agenda?

“Quite a bit actually,” Mr Strong said. “Our focus is firstly to engage with the community, telling the story of how red meat is produced responsibly, and secondly making the cost and health perception of red meat more palatable.”

MLA was also working with chefs and butchers, teaching them the value of secondary cuts, identifying red meat meal solutions that kept the costs down, and most importantly, kept red meat on the menus of restaurants and corporate catering providers.

“As we know from our research, cost is a major barrier for consumers, so MLA demonstrates cost-effective options using non-primal cuts to foodservice and retail teams. In doing this, not only do we inform our retail and foodservice partners about red meat, but it indirectly extends the message to consumers, when chefs and butchers themselves start to tell consumers the good story of red meat and the value of secondary cuts.”

MLA was also working closely with health professionals including dieticians and GPs, because when they provided advice, consumers sat up and took notice, Mr Strong said.

MLA’s ‘So What’s for Dinner?’ campaign reached a quarter of Australian GPs, providing them with resources on how to encourage patients to eat a healthy diet which includes the recommended amounts of red meat.

Mr Strong said another common question he was asked was, whether plant or alternative-based proteins were a threat to Australian red meat.

“Like animal activism, plant-based proteins have received a lot of air-time this year. At first glance, it can seem that this protein will pose major competition to our product,” he said.

“Plant-based alternatives aren’t new. What is new are alternatives seeking to mimic the experience of eating red meat – its taste, its smell and its appearance – but without the perceived animal welfare or perceived environmental impacts,” he said.

“What’s also new are the cell-based products that are grown in a lab, rather than in a paddock.”

Mr Strong said MLA was keeping a close watch on these alternatives to red meat – and most importantly – on the reaction of consumers to these products.

“It’s important to note that MLA’s market research indicates there’s low consumer awareness of cultured and synthetic meat and only a modest number would like to try these products.

“Only 5pc of Australians claim to eat plant-based proteins, like tofu, on a weekly basis.

Global mega trends indicated ‘health’ and ‘wellbeing’ and a preference for ‘natural, quality foods from trusted sources’ were important to consumers. Coupled with this is strong consumer interest in provenance and production.

Marketers of red meat could make claims their products are natural and minimally processed, while manufacturers of lab-grown meat and plant protein products would have a much tougher job to make these same claims, Mr Strong said.

“But, to remain relevant in this competitive environment, we need to continue to focus on the consumer – understanding their concerns, desires and must-haves – and delivering on these.

“That’s why programs like Good Meat, the Australian Beef Sustainability Framework and MLA’s other work in telling the story about red meat production and its sustainability are not nice-to-haves – but must-haves,” he said.