WITH slaughter cattle heading into a period of extreme short supply and livestock prices rising after years of drought, Australian beef processors are exploring new technologies seeking to squeeze every last morsel of meat yield from each carcase they handle.

One of these, displayed at Brisbane’s recent FoodTech Queensland trade show, was a meat recovery unit produced by European equipment manufacturer, InjectStar.

Glen Bramley, national sales manager at Argus, which markets and distributes the InjectStar equipment in Australia and New Zealand, told Beef Central that while such technologies were not necessarily new, they had been refined a lot in recent years to make them more commercially attractive. Technology advances and greater automation had contributed greatly to that.

Beef Central understands only about five or less large Australian beef processing facilities have so far installed post-boning meat recovery units of various types, but interest in the technology is growing rapidly. One processor known to operate a harvesting system would not offer details of the equipment in use, claiming commercial advantage, when approached for this article.

While there are a number of meat recovery systems on the market to extract greater yield from traces of meat left on boned carcases, the European InjectStar system that Argus had on show at FoodTech displayed some unique features.

Being a low-pressure linear system, the equipment produces little or no increase in temperature. Alternative rotary-based mechanical separation systems using higher pressure to extract lean meat remnants from bones typically generate heat, which can compromise food safety in raw meat. Temperature is the enemy in this process, because of the greater risk of bacterial contamination.

Older rotary-based meat recovery technologies also tended to grind bones to such an extent that calcium levels in the resultant lean meat material would rise. 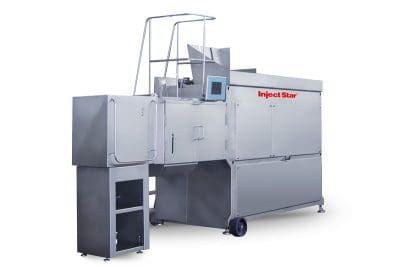 With the new linear system, the structure of the bones remains more intact, and once pressed, the extracted material is passed through an 8mm sieve and placed in a soft separator containing a 2mm sieve to remove any remaining bone, cartilage and sinew.

What emerges is a finely-textured lean meat material which can be used for a wide variety of applications. In one system sold to a Victorian processor, the extracted material, rather than being simply blended with conventional ground beef, is being used separately to manufacture ground beef pizza toppings.

“While the end-product will vary a little depending on the type of boned material used, it will typically deliver a product similar to an 80-85CL (Chemical Lean) finely ground beef,” Argus’s Glen Bramley said.

The unit will accept a wide range of bones from the boning room, ranging from rib bones and back bones to H-bones and larger leg bones. In an application like ribs, for example, a boner would continue to debone the intercostal meat between the ribs as normal, but any residual meat left on the ribs would be salvaged using the meat recovery unit. Fattier bones like brisket bones will produce a corresponding lower CL material.

Argus claims a yield of around 20 percent using the technology, meaning a tonne of typical beef bones fed into the unit will produce about 200kg of lean boneless beef.

While the manufacturer, Austria’s InjectStar, has had wide uptake in Europe in chicken and pork processing, it had now developed the technology further for beef and lamb applications. Part of that has included the addition of a pre-breaker, to handle the size of larger bovine bones, before entry into the main press chamber.

Most red meat processors size-up investment in new and emerging technologies like this in terms of payback period, and the Australian distributors claim a payback of somewhere around four to six months, depending on application, based on a 1.5 tonne/hour machine worth a little less than $1 million, and retrieved material value of $4/kg.

The injectStar equipment comes in three sizes, with capacities up to three tonnes of bones per hour.

“It converts a product that might otherwise be worth 50c/kg as part of the rendering stream, into something worth considerably more, for human consumption. And the beauty is that once the bones are pressed and the lean meat material is extracted, the remaining bones go off to rendering anyway,” Mr Bramley said.

Beef Central asked Argus why adoption had not been more vigorous in beef processing operations in Australia to this point, given that it had been heavily embraced in other parts of the world, like Europe.

“Australians tend to be a little fussier about what sort of protein they want to eat,” Mr Bramley said.

Emotive attacks by people like celebrity chef Jamie Oliver on Lean Finely Textured Beef* in the US, which he infamously described as ‘pink slime’, have inevitably created some challenges.

“But the world is hungry for protein, and leaving traces of perfectly healthy lean meat on bones, instead of extracting it for human consumption makes no sense.”

“Based on the sort of end-material this system produces, I don’t believe anybody in Australia having a barbecue would be disappointed with beef patties made from raw material from a meat recovery unit,” he said.

* The Lean Finely Textured Beef, process used in the US uses very different extraction processes than the meat recovery unit described in this article, but produces a product of similar appearance.