FAMILY-OWNED Woodward Foods Australia claimed the champion lamb of show title for the second year in a row during the Royal Queensland Food and Wine Show branded beef and lamb competition at the Brisbane Showgrounds this week. 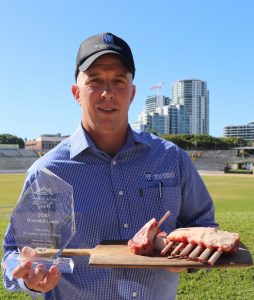 It was the first time in three years that Tasmanian-produced lamb had been outshone, with Woodward Foods Australia’s HRW Tasmanian Lamb winning the title in 2019 and 2017, and Melrose Wholesale Meats’ Tasmanian Royal taking top honours in 2018.

Chief judge Elaine Millar said the Australian Lamb product had a long-lasting juiciness, due to its fine silky threads of marbling.

A total of 36 entries were received in the Brisbane’s lamb and beef competition this year, judged over two days last week by a team of 13 food experts including some of Queensland’s top chefs.

After being postponed in May because of the Coronavirus pandemic, the Branded Beef and Lamb Competition was rescheduled until July 7, with an awards ceremony earlier this week.

RQFWS award-winning beef and lamb products will be served from 7-16 August at a pop-up store in King Street at the Brisbane Showgrounds, as part of Ekka 2020 Online presented by RACQ to keep the spirit of the Royal Queensland Show alive.