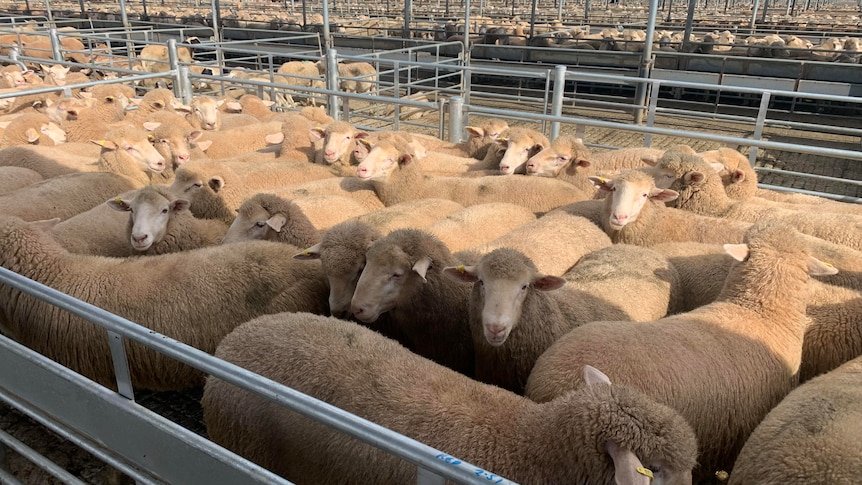 Another national lamb record was broken at the sheep and lamb sale in Wagga Wagga in New South Wales’ Riverina.

Forty-five new-season lambs sold for $331.20 — which translates to 1033c/kg carcase weight — to MC Herd, an abattoir from Geelong in Victoria.

The new record is more than $10 above the previous $320 set three years ago.

Both records belong to Gordon and Wayne Rodham, two brothers in their 80s from nearby Uranquinty.

The price of lamb has continued to rise as global demand for meat ramps up through the back half of the winter season.

Mark Logan from RH Blake & Co said while the brothers traded separately, they live with the livestock.

“In the mobs of the ewes and lambs I drafted yesterday, he had five ewes that had triplets on them so that the ewe rears every lamb,” he said.

“The lambs are on creep feeders. They live with them, and they certainly get the results.

“They always present their stock really well, and their sheep are so fertile, and always on feed.

“They actually get three lambs in two years, so they sneak another one in, and they generally always top the market.”

Mr Logan said the market had gone in leaps and bounds over the last three weeks.

“The lamb per kilo price is about the same, so I think Herds decided to buy a bit of weight and they probably caught everybody off guard.

“Like most of the abattoirs now, they do a fair bit of exporting and do a bit of trade job as well,” he said.