The story of how Australia produces the world’s most sought-after lamb, from the farm right through to the consumer, has been brought to life using innovative 360 degree virtual reality technology.

The immersive 360 degree reality experience caters to consumers by telling them the story of Australian lamb production and underpins why Australia produces the greatest lamb in the world.

The experience takes consumers into the world of Australian sheep farming, transportation, processing, and end markets, such as butchers.

It enables consumers to experience the industry through a VR headset from the comfort of the Good Meat coach.

“Since the launch of the Australian Beef Paddock to Plate Story at the EKKA in Brisbane in August 2017, more than 32,500 people have experienced Australia’s red meat production system through this fully immersive and highly engaging resource, as it has travelled around Australia,” Ms Sharp said.

“We’re now focusing on showcasing Australia’s world-renowned lamb industry to continue to meet the rise in consumer interest in the provenance of food.

“Recent research for MLA shows that only about one in five meat eaters have a good understanding of the Australian red meat industry and there are now almost 20% fewer Australians from urban centres visiting cattle or sheep farms annually compared to eight years ago.

“MLA understands the consumer is king and it is vital that we deliver innovative new ways to engage the broader community with fact-based tools.

“The Lamb Paddock to Plate Story further demonstrates to consumers that the red meat industry is transparent and open. Community engagement and trust is integral to a sustainable and prosperous industry in the long-term.

“This video forms an important part of our domestic marketing strategy alongside tools such as the Good Meat website, which are designed to reassure consumers that Australian red meat is produced with the highest animal welfare and environmental standards.”

Sheep Producers Australia Independent Chair Chris Mirams said the Lamb Paddock to Plate Story was an integral way of bridging the gap between producers and consumers. 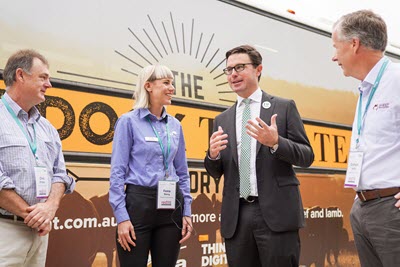 “It brings to life what sheep and lamb production is all about and immerses people in our industry,” Mr Mirams said.

“We produce a quality protein source and have a great story to tell and, while we cannot take all of our consumers out to farms, it is a technologically savvy way of bringing the farm to them and providing an experiential learning opportunity right in the heart of the city.”

Following today’s launch, the Australian Lamb Paddock to Plate Story will hit the road, continuing to schools around Canberra and Yass, finishing up at Dookie, Victoria, on 28 November. More information about its tour destinations will be released in early 2019.